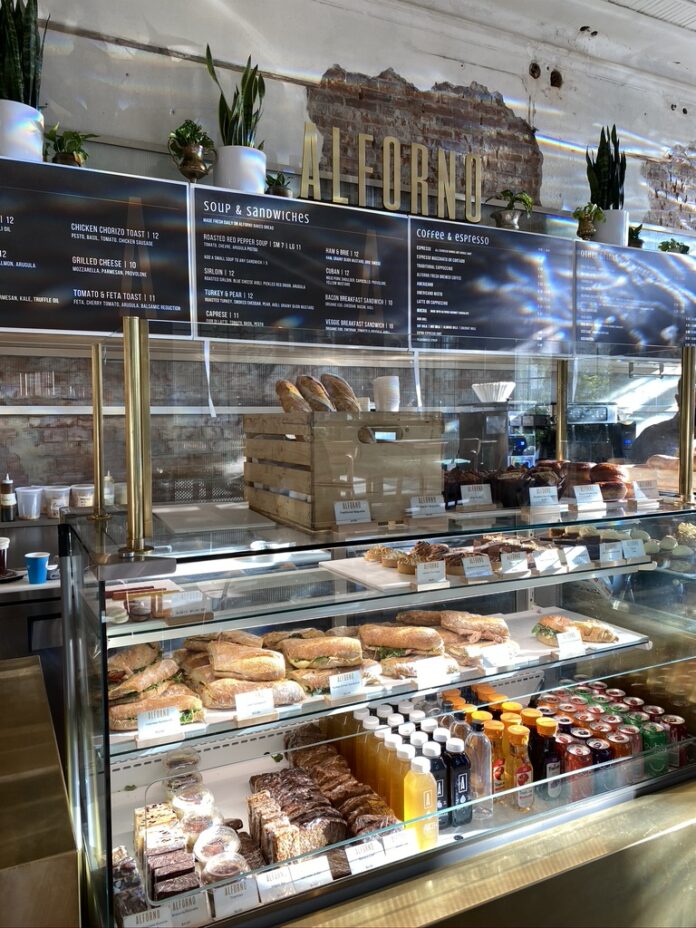 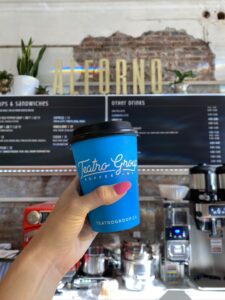 Alforno First Street is the new kid on the block in Calgary’s bustling Victoria Park neighbourhood. The Teatro Group’s newest addition in the First Street Market is part of a nine vendor food hall that puts community and connection at the forefront. Located on the main floor between The Underwood and Union Square towers, the market houses Actually Pretty Good, Raw by Robyn, Friends with Benedicts, Hi 5, La Mano, Moose and Poncho, Pure Street Food and Saffron Street. Alforno’s second location brings an elevated experience to the new locale in a beautifully designed space. 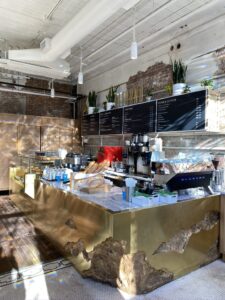 Their gleaming custom-made gold bar designed by McKinley Studios draws in the eye, which then focuses on intricate interior details like sections of exposed brick and lively greenery. Alforno First Street boasts a menu that reflects that of the original Alforno location and is filled with small bites, sandwiches, soups, baked goods and of course, incredible coffee and beverages. This new opening brings a sustainable coffee program to an area that was previously lacking in local coffee options. Due to this, the space has been drawing in professionals and residents from the surrounding area who are excited about this unique culinary one-stop shop. Sentiments have been overwhelmingly positive, with many businesses and individuals reporting that First Street Market is just what the neighbourhood needed. 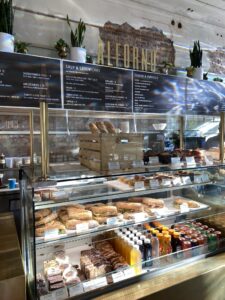 In the spirit of community, Alforno gifted its Victoria Park neighbours with mixed baked goods boxes to celebrate its new opening. These deliveries have been occurring on an ongoing basis for the past couple of weeks, as it takes time and care to complete this kind of task. The establishment is happy to be contributing to the city’s vibrant downtown culinary scene, something that the Teatro Group has been dedicated to since its flagship opening in 1993. The dedication to this cause is evident by the team’s enthusiastic and helpful demeanor. Alforno First Street came a year after their Holy Cow YYC launch, the group’s gelato and donut shop concept in the city’s Sunnyside neighbourhood. As one can see, the restaurant group that has elevated the Calgary food scene since the early 1990s continues to expand its influence and enhance restaurant experiences across town.